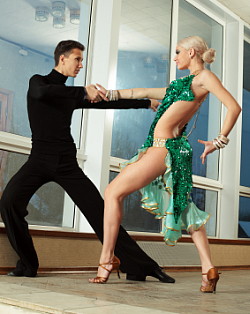 Have you ever wanted to learn the Cha Cha?

Cha cha is a fun and confident dance with a lot of popular music options. Some describe the cha cha as cheeky, leggy or sassy. It is definitely a sexy dance! Here is some great information on this popular American Rhythm and International Latin dance style.

This is a fun, flirty dance that grew out of the Cuban Mambo and became immensely popular in the United States in the 1950’s. This is an exuberant dance that will get your heart pumping and put a smile on your face.

Cha Cha originated in Cuba and evolved from a slow version of Mambo. The musical rhythm inspired dancers to dance a hip syncopation to the forward and back breaks of a mambo which late evolved to a triple step.

In 1952, an English dance teacher Pierre Lavelle visited Cuba and saw dancers dancing this triple step to slow rumba and mambo music.  On his return to Britain, he taught this as a separate dance and it has since evolved to International Latin Ballroom Cha Cha.

The Cha Cha is a non-progressive, lively, fun and flirty dance, which uses a “ball flat” foot action and keeps the body over the feet. It consists of triple chasse steps (cha cha cha’s) and rock steps. The legs and hips are used to produce a strong rhythmical movement that compliments the music. This dance has closed position as well as single handhold and double handhold movements. Often at an advanced level, the couple may be in apart or solo position. Because of this dance’s easy adoption to modern music, the Cha Cha is probably the most popular of the Latin dances.

Danced in 4/4 timing, the music has 4 even beats with the accent on the first beat of the bar. Cuban motion in Cha Cha is more staccato than Rumba to reflect the music with emphasis on count 1.

Often, the music also has an additional half beat between the fourth and first beat.

Here is an example of Cha Cha Music

I've created moments and memories dancing with my daughters that are priceless. I smile watching them in their lessons and at the Friday night parties and I just can't adequately express how much that means to me. They are both loving the experience!

As for myself, it has been a long time since I have been challenged with a new hobby. The more I've learned, the more I learn how much there is to learn! That is exciting to me, and I can't wait to learn more and become a better dancer!

dance,
feet move,
they know their place,
flare out,
she is beautiful.

Phoenix,
it's too bad,
you flew away,

We don't have a lot of money or time for that matter but we feel so fortunate for such an opportunity to learn these fantastic things from a down to earth person. I was gifted lessons from my boyfriend at Christmas and we both love it! I hope she knows how much it means for us to have her as an instructor!!! Seriously love this new world and teachings!! It's everything I imagined it would be and more!!!!