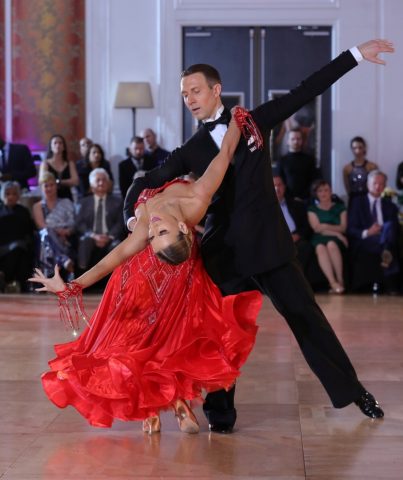 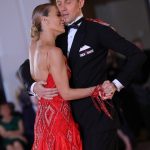 Foxtrot is a beautiful dance full of style, class, and grace. If you like jazz, the smooth style of Frank Sinatra, or even country music then you will love this dance. The movements of this dance feel like cruising in a convertible on a warm sunny day, moves like Gene Kelley, and even resemble the personality of Jessica Rabbit. Whether you are dancing the American Foxtrot, International Slow Foxtrot, Lounge dancing or Country Two Step this dance is sure to be enjoyed.
History:
The dance was premiered in 1914, quickly catching the eye of the husband and wife duo Vernon and Irene Castle, who lent the dance its signature grace and style. The origin of the name of the dance is unclear, although one theory is that it took its name from its popularizer, the vaudeville actor Harry Fox. It is said that Mr. Fox, tiring from multiple performances, started dancing every 2 beats instead of every beat and developed "Fox's Trot". Two sources, Vernon Castle and dance teacher Betty Lee, credit African American dancers as the source of the foxtrot stating that  it was being danced years before.

W. C. Handy ("Father of the Blues") notes in his autobiography that his "The Memphis Blues" was the inspiration for the foxtrot. During breaks from the fast-paced Castle Walk and One-step, Vernon and Irene Castle's music director, James Reese Europe, would slowly play the Memphis Blues. The Castles were intrigued by the rhythm, and Jim asked why they didn't create a slow dance to go with it. The Castles introduced what they then called the "Bunny Hug" in a magazine article. Shortly after, they went abroad and, in mid-ocean, sent a message to the magazine to change the name of the dance from "Bunny Hug" to the "Foxtrot." It was subsequently standardized by Arthur Murray, in whose version it began to imitate the positions of Tango.

At its inception, the foxtrot was originally danced to ragtime. From the late 1910s through the 1940s, the foxtrot was the most popular fast dance, and the vast majority of records issued during these years were foxtrots. The waltz and tango, while popular, never overtook the foxtrot. Even the popularity of the Lindy hop in the 1940s did not affect the foxtrot's popularity, since it could be danced to the same records.

Over time, the foxtrot split into slow and quick versions, referred to as "foxtrot" and "quickstep" respectively. In the slow category, further distinctions exist between the International or American style of the foxtrot and the continuity American style, both built around a slow-quick-quick rhythm at the slowest tempo, and the social American style using a slow-slow-quick-quick rhythm at a somewhat faster pace.
Music:
Danced in 4/4 timing, the music has 4 recurring, even beats. There is an accent on the first beat of each bar. The music is smooth, non- jerky and suggests a smooth movement and transfer of weight across the floor.
Characteristics:
In its present form, the Foxtrot should be performed with smooth, continuous undulating movement. The rise and fall should not be as pronounced as the Waltz but still be apparent. Even though there is a progression from Social Foxtrot that is commonly danced at a faster pace, to a more continuous Foxtrot danced at a slower pace, there should always be a sense of a smooth, continuous movement around the floor.